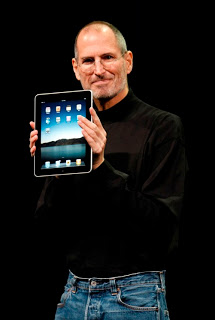 Steve Jobs took the stage, putting the rumor mill to rest and unveiling Apple's "latest creation." It's called the iPad and it's the newest wireless device from the maker of the popular iPhone and iPod. Our Adam Balkin has more.

UNITED STATES -- "Is there room for something in the middle? Something between a laptop and a Smartphone? We think there is. Today we'd like to introduce you to the iPad," said Apple CEO Steve Jobs.

And with that, Jobs made official the worst kept secret in the tech world over the last several months, the much anticipated Apple tablet computer we now know is called the iPad. Starting at $500 it's half an inch thick, a pound and a half in weight and about the size of a legal pad. It essentially looks and acts like a giant iPod Touch. In fact, it can run almost all Touch and iPhone apps right out of the box, can get online via a WiFi wireless internet hotspot and some will have 3G data access via AT&T. And taking a direct swipe at Amazon's Kindle, it has access to a new iBooks store which will try to do for books what iTunes does for music and movies.

But, and you can probably blame this on the huge build up or unrealistic expectations, some in the tech world are already saying this is not the big wow product they were necessarily hoping for that would fill that space PC makers have been trying to fill for years, that space right in between Smartphones and laptop computers.

"It's basically just a big iPod Touch. There's basically nothing that differentiates it from an iPod Touch other than its size. It basically met everyone's expectations, maybe a little bit less, without bringing anything super new or exciting, so I think people are a little disappointed," said Adam Frucci of Gizmodo.com.

As for some other key specs people were eager to hear about, Apple says the iPad will have a ten-hour battery life, comes with between 16 to 64 GB of storage, depending on the model. Again, they'll start at about $500 and run as high as just over $800. As for the final need to know piece of info, when it'll be available, about two months from now.

- Poor Vocabulary?
Sometimes we go through one of those moments when the word we are looking for is not there in our repertoire. Even in our native language it happens, and it seems to happen to pretty much everyone, or at least often enough to make me think that. I've...

- Why Do People Sign Up For English Classes?
© Tomasz P. Szynalski, Antimoon.com Pawel Kowalczyk, a reader of Antimoon, wrote to us some time ago, asking this question: I don't understand people who go to English classes. In most cases, the results of a typical student are not worth the...

- Myth #6: "if You Didn't Learn A Foreign Language As A Child, You Will Never Be Fully Proficient In Its Grammar"
© Tomasz P. Szynalski, Antimoon.com This is a more general version of the "foreign accent" myth described in the previous article in the series. It has its roots in the Critical Period Hypothesis proposed by Eric Lenneberg in 1967. Lenneberg suggested...