Differences between verbs of sight 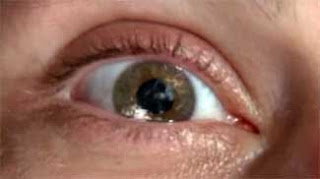 glance = to take a brief look (intentionally)
glimpse = to take a brief look (unintentionally); a "glimpse" can also be intentional, for example, when someone is trying very hard to see something and then finally catches a glimpse of it. When intentional, a "glimpse" usually requires more effort, or maybe some stroke of luck.
stare = to give a rude look to somebody; a "stare" is not always rude--I can stare at someone in the same way I might gaze at him or her. Also, you can definitely "stare" at things, which is hardly ever rude. "Staring" generally just means to look at someone or something for a long time, for whatever reason.
gaze = to give a romantic look to somebody; when referred to "someone," it does have a romantic sense, but when referred to something, it may simply have a sense of tranquillity, remarkability, astonishment, etc. For example, "to gaze at the stars."
contemplate = to observe deeply; this does not have much to do with sight.
skim = to read inattentively; yes, but not in a negative sense. It simply means "to gather the main idea(s) of a text by reading it quickly."
scan = to read with attention; this word can overlap with "to skim" at times, but you're right that it usually means "to read more diligently," in the sense that the reader attends to every part of the text.
peek = to take a brief look, secretly
peep = to take a long look, secretly; yes, and this verb is usually used in the progressive: "he was peeping" or "We are peeping"--which adds to the idea of a longer length of time.
peer = to observe searching something; I think you mean "to search for something by making an observation." Also, "to peer" is usually followed by a preposition--"to peer into something," "to peer over something."

- Intonation And Stress - Key To Understanding And Being Understood
By Kenneth Beare Say this sentence aloud and count how many seconds it takes. The beautiful Mountain appeared transfixed in the distance. Time required? Probably about 5 seconds. Now, try speaking this sentence aloud. He can come on Sundays as long...

- Your Biggest Challenge In Learning English
Author: Amber; Do you remember all of the people who told you that English is one of the hardest languages to learn? Well, they were right. This does not mean you can?t learn it. It only means that there are some challenges you will have to overcome.....