10 British Slang Expressions You Will Hear When Visiting London

If you?re planning on visiting London in the future, you might just want to familiarise yourself with some British Slang expressions that are very commonly used by the British.
They will be very useful particularly if you?re likely to be socialising with Londoners.
1. ?Mind The Gap? 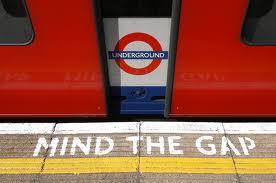 This famous expression  is always used on trains and the London Underground (Tube). The ?gap? refers to the space, often wide, between the train and the platform. Be sure you take a big step when getting off the train or tube or you could hurt yourself!
2. ?All Right, Mate??
?Mate? is British Slang used to refer to men. A lot of English people, especially in the pub, use it instead of ?How are you??. They don?t always expect an answer, but you could just respond: ?Yes, Thank You?.
3. ?Naff?
If something is ?naff?, it is very uncool. ?That jumper is so naff. There is no way I?m wearing it.?
4. ?The Full Monty?
This British Slang word is not to be confused with the film of the same title where the main characters removed all their clothes for a striptease act. It actually means the whole thing. You can often hear it when the English are asked at breakfast what they would like to have and they answer: ?The Full Monty? meaning the Full English Breakfast (sausages, bacon, eggs, tomatoes, fried bread and black pudding)
5. ?Grub? 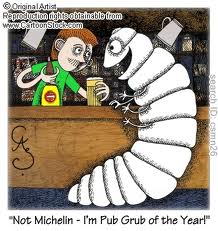 The literal meaning is larva, but it is also another word for food. Some English will say: ?What?s for grub?? meaning ?What?s for dinner or lunch??.
Sometimes, you will see the word ?Pub Grub? referring to Pub Food outside pubs.
6. ?Moreish?
?I love Pringle Crisps. They are so moreish.? This comes from ?more? and simply means that something is so good that it makes you want to eat more of it.
7. ?Not My Cup of Tea? 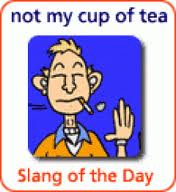 When the English don?t like something, but don?t want to be rude they will say: ? I?m afraid that going to nightclubs is not my cup of tea?.
8. ?Quid? 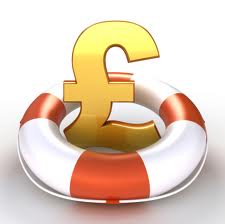 This is another British slang word for the UK currency, the pound. You will often hear people use this word instead of ?pounds?. Example: ?I paid ten quid for that shirt.?
9. ?Spend a Penny? or ?Loo?
This is not as commonly used as the other British slang words but I love it so I thought I?d add it here. It means to go to the bathroom. It?s often used in situations where people don?t really know each other well, for example, in a business meeting. In that case, they might say: ?I need to spend a penny?.
The other word commonly used is the ?loo? to refer to ?toilet? or ?lavatory?. ?Where is the loo??
10. ?Ta?
This basically means ?thank you?.
Do you know any other British Slang words or expressions? What are your favourites?
If you enjoyed this post, please share it.
And don?t forget to subscribe to my blog if you don?t want to miss my future posts. All you have to do is to add your email address to the box headed ?Subscribe to my Blog? on the right hand side of the Home Page.
Ciao for now.
Shanthi
PS This post appeared in the summer on my other website Language AND The City.
Source: http://englishwithatwist.com/2013/10/21/10-british-slang-expressions-you-will-hear-when-visiting-london/

- Top English Hints - Hear Or Listen?
Hear and listen are verbs that we use to talk about our sense of hearing - using our ears. But they have important differences in meaning. 1. Hear We use hear to mean simply that sounds come into our ears. It may not be deliberate. As...

- Using Future Form
There are many ways of talking about the future in English. Which way you choose depends on how you see the future. Is the future event planned or unplanned, a schedule, or a prediction? Making predictions in EnglishYou can use both will and going...