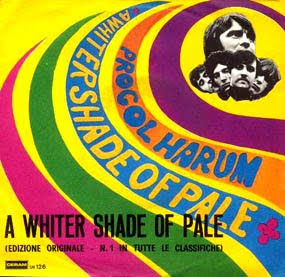 From Wikipedia:
"A Whiter Shade of Pale" is the debut song by the British band Procol Harum, released 12 May 1967. The single reached number one in the UK Singles Chart[1] on 8 June 1967, and stayed there for six weeks. (Without much promotion, it reached #5 on the US charts, as well.)

With its haunting tone and Bach overtones, vocals by Gary Brooker, and unusual lyrics by Keith Reid, "A Whiter Shade of Pale" reached #1 in several countries when released in 1967. In the years since, it has become an enduring classic. In 2009 it was the most played song in public places in the UK,[2] and the United Kingdom performing rights group Phonographic Performance Limited in 2004 recognized it as the most-played record by British broadcasting of the past 70 years.[3] Also in 2004, Rolling Stone placed "A Whiter Shade of Pale" #57 on its list of the 500 Greatest Songs of All Time.

More than 900 recorded cover versions by other artists are known.[4] The song has been included in many music compilations over the decades and has also been used in the soundtracks of numerous films, including The Big Chill, Purple Haze, Breaking the Waves, The Boat That Rocked and notably in Martin Scorsese's segment of New York Stories. Cover versions of the song have also been featured in many films, for example by King Curtis in Withnail and I and by Annie Lennox in The Net.

The original writing credits were for Brooker and Reid only. On 30 July 2009, Matthew Fisher won co-writing credit for the music in a unanimous ruling from the Law Lords of the House of Lords.


Lyrics
Reid told Songfacts that he got the title at a party, which gave him a starting point for the song.[6] He overheard someone at the party saying to a woman, "You've turned a whiter shade of pale," and the phrase stuck in his mind.[7][8] The original lyrics had four verses, of which only two are heard on the original recording. The third verse has been heard in live performances by Procol Harum, and more seldom also the fourth.[9] The author of Procol Harum: beyond the pale, Claes Johansen, suggests that the song "deals in metaphorical form with a male/female relationship which after some negotiation ends in a sexual act."[8] This is supported by Tim de Lisle in Lives of the Great Songs, who remarks that the lyrics concern a drunken seduction, which is described through references to sex as a form of travel, usually nautical, using mythical and literary journeys.[10] Other observers have also commented that the lyrics concern a sexual relationship.[7]

The phrase a whiter shade of pale by Keith Reid has since gained widespread use in the English language, noticed by several dictionaries.[11][12][13] As such, the phrase is today often used in contexts independent of any consideration of the song. (See [14] for many annotated examples complete with links to original sources.) It has also been heavily paraphrased, in forms like an Xer shade of Y - this to the extent that it has been officially recognized[15][16] as a snowclone - a type of cliché and phrasal template.

Composition
The Hammond organ line of "A Whiter Shade of Pale" was inspired by Johann Sebastian Bach's "Sleepers, Wake!" and "Air on a G String", but contrary to popular belief, the song is not a direct copy or paraphrase of any music by Bach,[17] although it makes clear references to both pieces. This similarity is referenced in the 1982 play The Real Thing by Tom Stoppard and the 1991 film The Commitments. The music also borrows ideas from "When a Man Loves a Woman" by Percy Sledge.[18]

Reception
The single was released on 12 May 1967 (UK, Deram Records). It entered the UK charts on 25 May 1967. In two weeks, it had reached number one, where it stayed for six weeks. All in all, it stayed 15 weeks on the UK chart. A May 1972 re-release on Fly Records stayed in the UK charts for a total of 12 weeks, and reached number 13 as highest. In the US, it reached #5 and sold over one million copies.

Over time, "A Whiter Shade of Pale" has earned extensive critical acclaim.

It was named joint winner (along with Queen's "Bohemian Rhapsody") of the Best British Pop Single 1952-1977 at the BRIT Awards, part of Queen Elizabeth II's Silver Jubilee.
#57 on Rolling Stone magazine's list of the 500 Greatest Songs of All Time in 2004.
British TV station Channel 4 placed the song at #19 in its chart of the 100 greatest number one singles.[19

- 7 Reasons Why You Should Sing To Learn Languages
By Benny Lewis Singing is an amazing way to dramatically improve your language learning strategy. To prove to you that I?m serious about this, here is a video of me singing in German. It?s a pop song called ?Pflaster? from ich und ich that I like. I?m...

- My Top 10 Hair Band 80's Rock Albums Of All Time!
Remember not too long ago the days of the 80's? I do. Those were the best of times to be in High School and to be a long haired rock and roll drummer! We had our acid washed jeans. We had our ripped jeans with the white strands showing. Girls tried...

- Cats - The Musical - In Brazil
I have just watched Cats - The Musical!!! I strongly recommend, if you are keen on musical. CATS - Jellicle Songs For Jellicle Cats SOLO: Are you blind when you're born? Can you see in the dark? Dare you look at a king? Would you sit on his throne?...

- Beyonce Takes 6 Grammys, Makes History
By DAVID BAUDER, Associated Press Writer David Bauder It's a tribute to the Grammys' success at becoming more a musical spectacle than an awards show that on the night she made history, Beyonce was just another face in the crowd. Pop's reigning...