A Brief History of New Zealand 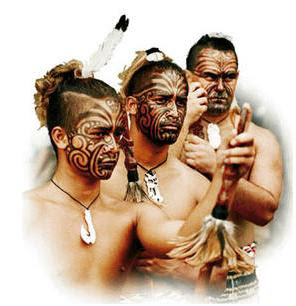 i.  Exploration
New Zealand (NZ), also called Aotearoa (?the land of the long white cloud?), is geographically comprised of two large islands?North Island and South Island?in the Southwest Pacific Ocean.  Polynesian tribes, the Tangata Whenua or  'People of the Land?, began arriving in canoes from the mythical land of Hawaiki in about AD 1000. Maori New Zealanders are descendants of these original Polynesian settlers. The first European to sight NZ was Abel Tasman, a Dutch explorer who discovered this land in December 1642 and named it Stateen Landt (later ?Nieuw Zeeland? and finally, the Anglicized ?New Zealand?). Tasman?s initial contact with the Maori was not successful; three of his crewmen died in a clash with tribesmen in a spot that was subsequently named Murderers? Bay (Gordon and Deverson 7). Despite this early contact, NZ was not destined to become a Dutch territory. In 1769, more than a hundred years later, James Cook, an English Lieutenant (later Captain) embarked on three South Pacific expeditions to this area of the world. Cook, a navigator and cartographer, mapped NZ and published his journals upon his return to Britain. Communication with the Maori was facilitated by the presence of translators who spoke the Polynesian language of Tahiti. It would be Britain that would eventually annex and colonize NZ, Cook making declarations on 15 November 1769 and 30 January 1770 in Mercury Bay and Queen Charlotte that ?helped ensure that Britain would dominate New Zealand?s subsequent history.?[1]
ii.  Settlement and Conflict
In the 1790s, European whaling ships sailed through NZ waters and, by the 1800s and 1810s, European traders and missionaries were settling in the coastal regions of NZ. Samuel Marsden, a Sydney prison chaplain, preached NZ?s first sermon on Christmas Day 1814 (Turner 5). The Musket Wars ? tribal wars in which Maori used European weapons ? raged inthe 1810s, 20s and 30s, and, by the time that peace was regained, at least 20,000 Maori had perished.[2] The founding document of NZ is the Treaty of Waitangi, which was signed by British representatives and over 500 Maori chiefs in 1840 to establish British Sovereignty in this region. NZ was subsequently populated in three waves by British, Australian, and Scottish immigrants, much of the settlement of NZ being organized by the New Zealand Company. An influx of migrants to NZ occurred after gold was unearthed in 1861 in Otago, which is located in the South Island. The New Zealand Wars (hitherto called the Maori Wars or Land Wars) in the 1860s resulted in Maori land being confiscated in the New Zealand Settlements Act (1863). Colonial forces wanted more control of the predominately Maori North Island. By 1900, the Maori people had lost the majority of their lands. NZ became a dominion in 1907 and achieved more complete autonomy from Britain in 1947. NZ is now member of the Commonwealth of Nations, which mainly consists of former British colonies.
Introduction: New Zealand English
i. History
New Zealand English (NZE), one of the younger varieties of English, is the product of this region?s particular colonial experience and history as an independent commonwealth nation. Immigration to NZ from Australia and different parts of Britain has had a significant bearing on the way NZE developed; this variety evidences the linguistic influences of both British English (BrE) and Australian English (AusE). Linguists reference the ?melting pot? theory when explaining how NZE emerged. Essentially, ?a new dialect arises when speakers of various dialects of English are thrown together, as in these colonial situations? (Gordon et al 76). NZE or ?New Zild? is generally thought to have emerged in its present form as late as the 1940s. However, the process of linguistic change began earlier, spoken English in NZ having undergone great change in the nineteenth century.  New Zild ? a very recent documentary on NZE, which aired on May 16, 2005 on NZ television ? drew on the work of NZ linguists and put forth a theory about the origins of NZE:
It was in Arrowtown ? heart of the 19th-century gold-fields ? that our own distinctive accent was born [?] the new accent was probably emerging everywhere ? it just happened faster in the English-speaking crucible of the gold-fields. And it happened first among women and the poor.[3]
ii. Heterogeneity and New Zealand English
In NZ?s population, different varieties of NZE have emerged, and determinants like geography, ethnicity, education and general social standing have influenced linguistic variation within the country. Linguists interested in the impact of socio-economics on speech have loosely divided NZE accents into three groups?cultivated (the accent of privileged New Zealanders), general (middle-class) and broad (lower classes). In the introduction to The New Zealand Dictionary (1995), Elizabeth and Harry Orsman identify that another major classification of NZE accents is based on ethnicity: Maori (New Zealanders descended from the original Polynesian settlers) and Pakeha (New Zealanders of European descent).
To learn more about New Zealand, go to: http://homes.chass.utoronto.ca/~cpercy/courses/eng6365-ladd.htm

- Australian English Development And Peculiarities
The history of Australian English starts with kangaroo (1770) and Captain James Cook?s glossary of local words used in negotiations with the Endeavour River tribes. The language was pidgin. Aboriginal Vocabulary The aboriginal vocabulary, which is one...

- Pidgin And Creole And The English Language
pidginDefinition:A simplified form of speech formed out of one or more existinglanguages and used by people who have no other language in common. By Richard Nordquist,Etymology:From Pidgin English, perhaps from a Chinese pronunciation...