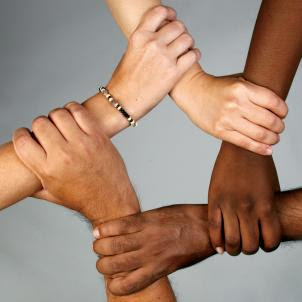 English as a Global Language

For more than half a century, immigrants from the Indian subcontinent and the West Indies have added variety and diversity to the rich patchwork of accents and dialects spoken in the UK. British colonisers originally exported the language to all four corners of the globe and migration in the 1950s brought altered forms of English back to these shores. Since that time, especially in urban areas, speakers of Asian and Caribbean descent have blended their mother tongue speech patterns with existing local dialects producing wonderful new varieties of English, such as London Jamaican or Bradford Asian English. Standard British English has also been enriched by an explosion of new terms, such as balti (a dish invented in the West Midlands and defined by a word that would refer to a 'bucket' rather than food to most South Asians outside the UK) and bhangra (traditional Punjabi music mixed with reggae and hip-hop).

The recordings on this site of speakers from minority ethnic backgrounds include a range of speakers. You can hear speakers whose speech is heavily influenced by their racial background, alongside those whose speech reveals nothing of their family background and some who are ranged somewhere in between. There are also a set of audio clips that shed light on some of the more recognisable features of Asian English and Caribbean English.

Slang
As with the Anglo-Saxon and Norman settlers of centuries past, the languages spoken by today?s ethnic communities have begun to have an impact on the everyday spoken English of other communities. For instance, many young people, regardless of their ethnic background, now use the black slang terms, nang (?cool,?) and diss (?insult? ? from ?disrespecting?) or words derived from Hindi and Urdu, such as chuddies (?underpants?) or desi (?typically Asian?). Many also use the all-purpose tag-question, innit ? as in statements such as you?re weird, innit. This feature has been variously ascribed to the British Caribbean community or the British Asian community, although it is also part of a more native British tradition - in dialects in the West Country and Wales, for instance ? which might explain why it appears to have spread so rapidly among young speakers everywhere.

Original influences from overseas
The English Language can be traced back to the mixture of Anglo-Saxon dialects that came to these shores 1500 years ago. Since then it has been played with, altered and transported around the world in many different forms. The language we now recognise as English first became the dominant language in Great Britain during the Middle Ages, and in Ireland during the eighteenth and nineteenth centuries. From there it has been exported in the mouths of colonists and settlers to all four corners of the globe. ?International English?, ?World English? or ?Global English? are terms used to describe a type of ?General English? that has, over the course of the twentieth century, become a worldwide means of communication.

American English
The first permanent English-speaking colony was established in North America in the early 1600s. The Americans soon developed a form of English that differed in a number of ways from the language spoken back in The British Isles. In some cases older forms were retained ? the way most Americans pronounce the