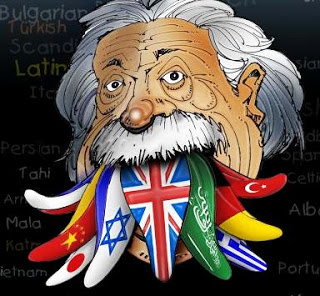 The status of English as an international language appears unassailable. It is simultaneously pre-eminent in science, politics, business and entertainment. And unlike any of its lingua franca predecessors, it has all this on a truly worldwide scale. There is no challenger comparable to it: Chinese has more native speakers, but every schoolchild in China now studies English. And India, set to overtake China in population by 2050, is avidly trading on its English expertise.

But English is not thereby immune to the principles of language survival. Above all, it is notable that beyond the 330 million or so native speakers, perhaps twice as many more use it as a second language. And this community of over 600 million second-language speakers, who make English pre-eminent as a world language, also make it vulnerable in the long term.

In 5,000 years of recorded language history, a few dozen languages have achieved the status of lingua franca, a language of wider communication among people whose mother tongues may be quite different. Spanish, French, Hindi, Russian and English have been lingua francas in the present age, as have been Latin, Quechua, Persian and Aramaic in the past. But this status does not come about by some utilitarian reckoning, or democratic selection. There is always a reason, be it conquest, trade, religious mission or social aspiration, which has selected a language to have this wider role, and that reason is hard to forget--and ultimately often hard to forgive.

This is seldom clear--at first--to native speakers. They naturally see their mother tongue as a simple blessing for the wider world. Pliny the Elder, writing in the 1st century AD of the then widespread use of Latin, boasted that it almost made the sky brighter; French author Anatole France (1844-1924) thought the French language was such a charming mistress that no one was ever tempted to be unfaithful to her. But neither language would have spread across Western Europe if their use had not once upon a time been imposed--by forces other than lucidity and charm.

There was status or wealth to be gained from knowing these languages, and in their heyday, no one believed they might one day go out of use. After all, they seemed not only useful, but also such exceptional languages. Latin--alone of western languages--hadgrammatica, an analysis of all its rules; French was regulated by an Academy, which would ensure the quality of its substance. Likewise, English, with its simple sentence-structure and openness to borrowed vocabulary, is often thought well suited to be a global medium.

But far from being disinterested aids to thought and communication, every lingua franca continues to bear the badge of its original spread; and this is often the cause of its ultimate undoing. This moral is as clear--and well-established--as the recorded history of the lingua franca phenomenon, a story as old as international trade routes and multinational empires.

Akkadian spread beyond the Assyrian empire on the strength of its pictograph-based cuneiform writing, but then yielded to Aramaic, a language combining widespread use with an alphabetic script. Sogdian, once spoken by merchants and divines from Samarkand to China, could not survive the decline of the Silk Road trade. And in Europe, Latin in the 9th to 16th centuries and French in the 17th to 20th centuries depended on educated elites. Wide use of those languages declined when power passed into other hands.

So while a lingua franca heightens bilingualism, often this is all it does. It only begins to replace a mother tongue when a growing number of people adopt it as their first language.

So, for example, among the British colonies, North America attracted many English-speaking settlers early on, as did Australia and New Zealand. But large numbers of Britons never settled permanently in India, Ceylon, Burma or Malaya. This explains the different status of English in these places today.

Any trend to political democratization, meanwhile, will diminish the use of English worldwide, because it downgrades the status of elites, the prime users of non-native English. This has already happened. With independence achieved after the Second World War, Tanzania, Sri Lanka, Malaysia and the Philippines all downgraded their official use of English. In India, too, English is beginning to lose its stranglehold on enterprise and education: In February, a major business newspaper in Hindi was launched, likely the first of many. The massive current expansion in Indian higher education (aimed at increasing participation from 10% to 15%) will also lessen the proportion of citizens who are educated in English as opposed to Hindi or another mother tongue.

An economic shift is also affecting the use of English. The language was originally spread by the acquisitive British empire, and was expanded in the late 20th century by the immense economic heft of English-speaking economies. Will it seem so attractive in 2050 when Brazil, Russia, China and India are predicted to comprise four of the six largest economies?

Some will find it hard to believe that the world could ever abandon its common language of science. It is true that the quasi-universal use of English in scientific publishing is a great convenience. But Latin was once just as pre-eminent, at least in Europe. Its fate in the 17th century shows that the language of a scientific tradition--even one that extends over more than a millennium--can be abandoned. Even then, it was unnecessary to settle on a single language as a successor; how much less so now, when ever-improving translation software is making language barriers tumble.

English will not decline as a first language: Indeed for the foreseeable future it will be among the five major mother tongues of the world. Spread out worldwide, it may even change and ultimately split into a family of languages. But it would go against the pattern of world history if alien peoples patronized English for very much longer than necessary. Chinese, Hindi, Spanish and Portuguese--possibly also Russian, Malay, Persian and Arabic--have the potential to increase within their vast regions, and perhaps even globally. The aspirations of some of these languages are already visible, if far from realization. China is a third of the way into its program to establish 100 Confucius Institutes around the world to popularize learning Chinese. They are now present in 23 countries, part of plans to have 100 million people studying Chinese worldwide by 2010.

In sum, the world in the next few generations is likely to see greater multilingualism and less English-backed bilingualism. We can learn the long view from language history, but it may be a hard lesson.

Nicholas Ostler is the author of Empires of the Word: A Language History of the World and Ad Infinitum: A Biography of Latin, and is chairman of the Foundation for Endangered Languages.

- The Future Of English !
It has long been accepted that English is a global language, used in all corners of the world as a means of communication. In many parts of the world, English is regarded as a basic skill, which children learn at an early age so they can study through...

- Interview With David Crystal
Professor David Crystal OBE, internationally renowned writer, lecturer, broadcaster and one of the world's foremost authorities on language, kindly took time out during his recent flying visit to Brazil to give this fascinating, thought-provoking...

- Peter K Austin's Top 10 Endangered Languages
The linguistics professor and author shares a personal selection from the thousands of languages on the brink of disappearing * Wednesday August 27 2008 Peter K Austin has published 11 books on minority and endangered languages, including 12 Australian...