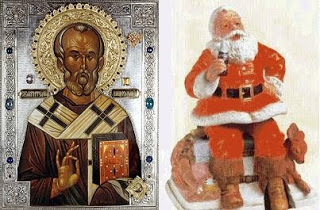 December 6 marks Saint Nicholas Day, and I thought I'd mark the beginning of the Christmas season by telling the story of Santa Claus's namesake. But before I do, I should remark that, historically speaking, there's not much we really know about Nicholas. Though he's one of the most popular saints in the Greek and Latin churches, his existence isn't attested by any historical document. All we can say is that he was probably the bishop of Myra (near modern Finike, Turkey) sometime in the 300s.

That said, there are of course many legends about Nicholas, and since these have influenced people throughout history, and they likely illustrate something about the historical man, they are fair game for a publication, like ours, devoted to Christian history.

Supposedly, Nicholas was born to a wealthy family in Patara, Lycia. His parents died, and he inherited a considerable sum of money, but he kept none of it. In the most famous story about his life, he threw bags of gold through the windows of three girls about to be forced into lives of prostitution. At least that's the most common version of the story; there are others, including an excessively grim one where the three girls are beheaded by an innkeeper and pickled in a tub of brine until Nicholas resurrects them.

After a couple of miracles (he's sometimes called Nicholas the Wonder-Worker) performed while he was still a boy, Nicholas was chosen by the people of Myra to be their new bishop. But it wasn't long before Diocletian and Maximian began their persecutions of Christians, and the new bishop was imprisoned.

When Constantine became emperor, Nicholas was released with countless others and returned to his preaching only to find a new threat: Arianism. According to one biographer (writing five centuries after Nicholas's death), "Thanks to the teaching of St. Nicholas, the metropolis of Myra alone was untouched by the filth of the Arian heresy, which it firmly rejected as a death-dealing poison." Other biographers claim Nicholas attacked the heresy of Arius (who denied the full divinity of Christ) in a much more personal way?he traveled to the Council of Nicea and slapped Arius in the face! As the story goes (and this should be taken as fantasy because there are pretty good records of the council, and Nicholas isn't mentioned), the other bishops at Nicea were shocked at such rude behavior and relieved him as bishop. But then Jesus and Mary appeared next to him, and they quickly recanted.

That's the questionable legend of Nicholas. But not the end of the story. Even by the reign of Justinian (d. 565), Nicholas was famous, and the emperor dedicated a church in Constantinople to him. By the 900s, a Greek wrote, "The West as well as the East acclaims and glorifies him. Wherever there are people, his name is revered and churches are built in his honor. All Christians reverence his memory and call upon his protection." The West became even more interested when his "relics" were taken from Myra to Bari, Italy, on May 9, 1087. He's said to have been represented by medieval artists more frequently than any saint but Mary, and nearly 400 churches were dedicated in his honor in England alone during the late Middle Ages.

With such a popularity, his legends inevitably became intertwined with others. In Germanic countries, it sometimes became hard to tell where the legend of Nicholas began and that of Woden (or Odin) ended. Somewhere along the line, probably tied to the gold-giving story, people began giving presents in his name on his feast day. When the Reformation came along, his following disappeared in all the Protestant countries except Holland, where his legend continued as Sinterklass. Martin Luther, for example, replaced this bearer of gifts with the Christ Child, or, in German, Christkindl. Over the years, that became repronounced Kriss Kringle, and ironically is now considered another name for Santa Claus.

- The Story Of Easter And Easter Eggs
The meaning of EasterThere's a bit more to Easter than just chocolate eggs so if you want to help your children learn a little more about the significance of this religious and historical event you can find out more here. We look at what Easter...

- English As She Was Spoke
The future of English The days of English as the world?s second language may (slowly) be ending ENGLISH is the most successful language in the history of the world. It is spoken on every continent, is learnt as a second language by schoolchildren and...

- Wounderous Stories
I have two learners, one lives near me, the other one lives far far far away. Both are great women, learners who are not afraid of making mistakes, therefore, they take the risks they need in order to go further and improve not just their English,...

- Origins Of English Language
Written by TUBA ?NCE We speak English but do we know where it comes from? I didn?t know until I started to study on this subject and I learned where it comes from and how it has developed. The history of English begins a little after A.D. 600. The ancestors...