The Sweet History of Muffins 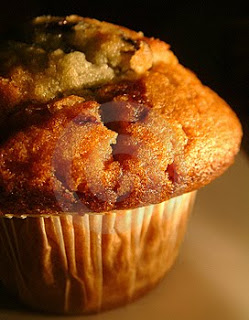 The derivation of the word muffin comes from the French word moufflet which is often times applied to bread and means soft.

The two main types of muffins are English muffins and American style muffins. They vary in style as well as flavor and history.

English muffins are a flat yeast raised muffin with nooks and crannies that are cooked on a hot griddle. English muffin history dates all the way back to the 10th and 11th centuries in Wales. Early English muffins were cooked in muffin rings which were hooplike and placed directly on a stove or the bottom of a skillet.

American style muffins on the other hand are more of a quick bread that is made in individual molds. The molds are necessary due to the mixture being a batter rather than dough. These muffins were originally leavened with potash which produces carbon dioxide gas in the batter. When baking powder was developed around 1857 it put an end to the use of potash as well as to the profitable potash exports to the old country.

Muffin recipes first began to appear in print in the mid 18th century and quickly caught on. By the 19th century muffin men walked the streets of England at tea time to sell there muffins. They wore trays of English muffins on there heads and rang there bells to call customers to there wares.

So next time you bite into a warm muffin think about its sweet history.

Shauna Hanus is a gourmet cook who specializes in creating gourmet recipes. She has extensive experience cooking with easy to find grocery items to create delightful gourmet meals. She is also the publisher of a no cost bi-monthly gourmet newsletter. Her newsletter is always fun and informational packed with tips and trivia you can use everyday. Sign up for her newsletter and learn more about Gourmayeats Weekly Recipe Club at http://www.gourmayeats.com

- English As She Was Spoke
The future of English The days of English as the world?s second language may (slowly) be ending ENGLISH is the most successful language in the history of the world. It is spoken on every continent, is learnt as a second language by schoolchildren and...

- Halloween's History
Halloween is a holiday celebrated on the night of October 31.  The word Halloween is a shortening of All HallowsÃ¢â?¬â?¢ Evening also known as Hallowe'en or All Hallows' Eve.Traditional activities include trick-or-treating, bonfires,...

- Poor Vocabulary?
Sometimes we go through one of those moments when the word we are looking for is not there in our repertoire. Even in our native language it happens, and it seems to happen to pretty much everyone, or at least often enough to make me think that. I've...

- St. Patrick´s Day!
St. Patrick's Day is an Irish holiday celebrated all around the globe to honor the patron saint of Ireland, Saint Patrick. Read on to learn more about the origin of the holiday and about the man who inspired it or visit our "Fun Facts about St. Patrick's...