Q: What's the feminine version of womanizer?
A: Maneater is the female equivalent to  male-associated word like womanizer. An irresistible woman who chews and spits out men after using them for some sort of gain -- be it sexual, financial or psychological.
There is a moment when the slangs turn into swearing ( or cursing) and below I am sharing with you an article  that explains further about how " rich" this study can be to an English learner. However, as the writer below says:
?avoid them, unless they convey something genuinely helpful or interesting?.
Professor Frank

Swearing and slang through the ages
The word on the street
by C.S.W 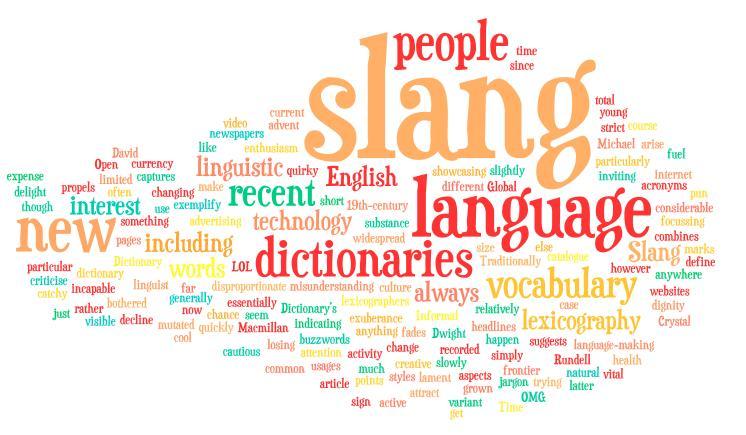 WANDER around the streets of any city and one is likely to find a rich patchwork of language. Linguists acknowledge the ever-changing coarseness of streets, rather than the stuffy offices where dictionaries are usually compiled, are often the best habitat to uncover the language of the age.
Captain Francis Grose knew this, and so he took to the streets in his mid-forties to produce a ?Classical Dictionary of the Vulgar Tongue? in 1785. That book remains lost to us today, but a revised edition?the 1811 ?Dictionary of Buckish Slang, University Wit, and Pickpocket Eloquence??survived. Captain Grose's work was supplemented by a series of collaborators (including one named ?Hell-Fire Dick?) for its expanded edition, and is a treasure trove of the language real people used two centuries ago, curses and all.
His compendium shows there is beauty and ingenuity worth recording in even the coarsest elements of our mother tongue. Though The Economist has a policy on swear words (?avoid them, unless they convey something genuinely helpful or interesting?), Johnson believes Captain Grose's dictionary provides plenty of interest as an anthropological and historical study of language through the ages.
Thus we investigate the term ?biter: a wench whose cunt is ready to bite her arse; a lascivious, rampant wench.? So too we admire those who insulted their friends by claiming an ill-judged liaison could result in the contraction of a ?Tetbury portion? (?a cunt and a clap?), named after a town a hundred miles outside of London (and, presumably, its disease-ridden inhabitants). Though obscene, there is beauty and historical insight couched in these terms. The language of the day illuminates the way of life through each era. The time of Captain Grose was torrid, dirty and brash?largely a world away from ours.
There are other choice quotable cuts to be found amongst the filth of everyday life in nineteenth century London. Some are of their time. Crooks of the time would do anything to avoid a ?wry mouth and a pissen pair of breeches?: death by hanging. ?Laced mutton? and ?trapes? are two words rarely?if ever?used today to refer to prostitutes, but were deployed frequently in the nineteenth century. Others are more permanent additions to the language. Barflies in America still drink ?tall boys? (?a bottle, or two-quart pot?). ?Clod hopper? remains as a pejorative term for a stupid person. British children still shout ?cheese it!? to tell others to run away from wrongdoing in the playground, unaware they are deploying criminal slang that pre-dates Dickens.
Cursing is endlessly inventive. Simon Donald, who co-founded the coarse British comic ?Viz? and will be taking a show called "School of Swearing" to this summer's Edinburgh Fringe festival, believes that at heart swearing is "a secret language and so, by its nature, must continually be reinvented". This constant reinvention can defy recording by traditional lexicographers. Back in 1785 (and later in 1811) it took someone like Captain Grose to wander the streets and note down the slang, idiom and jargon used in everyday life. Today, we have the internet, where thousands of amateur lexicographers work simultaneously in different cities across the globe.
Urban Dictionary collects some of the terms in everyday usage and posts them online. Like Wikipedia, anyone can add definitions to the site and so many terms will never have been used in conversation, never mind with regularity. (A surprising number of entries are little more than libellous attacks on former friends or colleagues.) Some entries are faddish in-jokes. Others capture a more widespread linguistic shift. Even if not necessarily documentary evidence of conversational usage, word fans can enjoy the inventiveness of terms like ?introdouche? (?the way in which a douchebag would go about introducing his/herself?).
Humans seem inherently keen to play with language, from puns to portmanteaus to plain old playing on words. ?Introdouching? is a good example of the Jenga-like qualities of our linguistic inventiveness. It relies on taking vogueish terms (?douchebag? being a recent favourite) from the bottom of the pile and adding them to the top, creating something new. Sometimes these coinages go too far, collapsing the tower. But occasionally they work, and stick in our collective corpora.
Sites like Urban Dictionary, and books like Captain Grose's compendium chart the constant reinvention of our language. To see how we cursed is to see how we lived, warts and all. But more than that, it gives Johnson's readers some old-school verbal ammunition with which to sting their foes in conversation.
Source: http://www.economist.com/blogs/johnson/2012/03/swearing-and-slang-through-ages

- David Crystal On Language Change
The prolific British language writer, David Crystal, has produced another winner: A Little Book of Language (now out in paperback), which Publishers Weekly calls "the perfect primer for anyone interested in the subject." In this excerpt, Crystal explains...

- English Slang ? Be Careful When You Use It
by Robert Hewson Millions of people around the world are trying to learn English or to improve their English.  There are a few things to be careful of when learning English.   One frustrating thing can be learning how to use English slang...