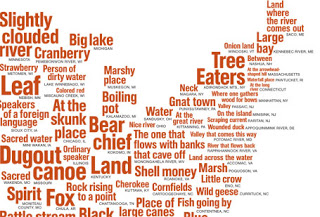 1. Be aware that certain food items are called by American names:

French fries or simply Fries are sliced and fried potatoes,
Chips are crisps.
Cookie is a Biscuit.
Biscuit is a small piece of soft bread.

2. Learn the different terms for parts of a building:

The First floor is the Ground Floor.
The Second floor is the First Floor.
Elevator is the Lift.
Apartment is the general word for a Flat.

3. Study these terms for when you are on the move:

The Trunk is the Boot of the car.
The Hood is the Bonnet.
A Traffic Circle is a Roundabout. Some Americans may use roundabout as well, though. Also, in the Northeast, the same might be called a "Rotary".
The colours of traffic lights are called red, yellow and green (not amber).
Truck is a Lorry.
Sidewalk is the Pavement. "Pavement" is commonly referred to as the street.
Gasoline or Gas is Petrol.
Airplane is used instead of Aeroplane.

4. Avoid embarrassment by understanding these differences:

Bathroom, Restroom or Washroom are used for the Toilet.
"Restroom" is always in a public places. A 'bathroom' usually means there's also a tub, but it can refer to a public toilet. 'Washroom' can refer to either.
An Eraser is a Rubber. Most Americans think of a Rubber as a condom, so this is an important one.

5. Remember when throwing something away that:

Garbage or trash is Rubbish.
Garbage goes in the Trash Can or Garbage Can. In both senses, it is acceptable to omit the "can" (just put in the trash).
"Trash Bag" is a Bin Liner.
A Dumpster is the colloquial term for a large trash container, or a dust bin.

Baby Stroller or Buggy is a Pram ('Baby stroller' or simply 'stroller' is most common).
Vacation is a Holiday or a trip to get away from ordinary life. This is quite important, because Holiday only means a special day, such as Christmas or Thanksgiving.
Flashlight is a Torch.
Dish Detergent is Washing-up liquid or liquid to wash dishes.
Next ___day is ___day next (ex. we are going on vacation next Thursday)
Football refers to American football in America. Soccer is used to describe what people in most other parts of the world know as football.

Others
Different areas of America have different terms, just as they do in Britain. A popular debate is "soda" or "pop." It means the same thing, but depending on where you are, it can be called either. Also, if you are in the South-East US and you ask for a "Coke," you might well be asked what kind, because they often use that in place of soda or pop.

Some language you have to be more careful of than others. If you ask about the lift, most people would know what you were talking about. However, if you ask for the third floor, you will be taken to the second. If you ask for a rubber or a fag (or worse, both), you will get dirty looks, because you're asking for a condom and (derogatorily) a homosexual, respectively.

If you go to a gym and ask for trainers and get an interesting answer or a ridiculous price, it's probably because they think you're talking about a coach.

Some words are less acceptable in America than in the UK e.g. do not ask for a fag when you want a cigarette -- You'll be asking for (quite derogatorily) a Homosexual, and most people will not be thrilled one bit.

This article was copied from Understand British Terms
There are very few cowboys in America today. In fact, referring to someone as a cowboy can often be taken as a demeaning term. Take care to avoid calling someone this directly.

Some Americans (such as myself) are very ethnocentric, so we don't bother to learn British slang, so try to only use literal terms. You might be ok with some that do enjoy your culture, but choose your rhetoric carefully.

Knock Up is a derogatory term for getting someone pregnant. Do not ever use that term in America unless you are in impolite company talking about pregnancy. For example, NEVER say "I'll knock you up tomorrow" unless you intend to impregnate the person to whom you are speaking.

Refrain from using American slang that is not in common use in other parts of the world so you can "fit in." Americans love visitors from other countries but often think non-Americans who use American slang sound ridiculous. Just be careful not to say words that they might not understand and may find offensive.

- 10 British Slang Expressions You Will Hear When Visiting London
If you?re planning on visiting London in the future, you might just want to familiarise yourself with some British Slang expressions that are very commonly used by the British.They will be very useful particularly if you?re likely to be socialising with...

- 10 Hard To Translate English Words
Inspired by a comment by a Listverse contributor on a recent list dealing with Untranslatable words, I decided to submit my first official Listverse list on words that represent concepts which are hard to translate from English into other languages....

- How To Fake A Convincing American Accent
Edited by Brigitta M  1 - Determine the region you wish toimitate. Knowing the difference between a Texans drawland the southern style of someone from Mississippi or Tennessee can make aworld of difference. Midwestern accents from areas such...

- Australian English Development And Peculiarities
The history of Australian English starts with kangaroo (1770) and Captain James Cook?s glossary of local words used in negotiations with the Endeavour River tribes. The language was pidgin. Aboriginal Vocabulary The aboriginal vocabulary, which is one...