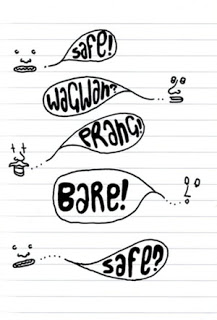 By
Explanation
Slang necessarily involves deviation from standard language, and tends to be very popular among adolescents. To one degree or another, however, it is used in all sectors of society. Although slang does not necessarily involve neologisms (some slang expressions, such as quid, are very old), it often involves the creation of new linguistic forms or the creative adaptation of old ones. It can even involve the creation of a secret language understood only by those within a particular group (an antilanguage). As such, slang frequently forms a kind of sociolect aimed at excluding certain people from the conversation. Slang words tend to function initially as a means of encryption, so that the non-initiate cannot understand the conversation. The use of slang is a means of recognizing members of the same group, and to differentiate that group from society at large. In addition to this, slang can be used and created purely for humorous or expressive effect.
Functions and origins of slang
One use of slang is simply to circumvent social taboos. Mainstream language tends to shy away from explicitly evoking certain realities and slang, like other informal forms of language, can permit one to talk about these realities. For this reason, slang vocabularies are particularly rich in certain domains, such as sexuality, violence, crime, and drugs.
There is not just one slang, but very many varieties ? or dialects ? of it. Different social groups in different times have developed their own slang. The importance of encryption and identity varies between these instances. For slang to maintain its power as a means of encryption, it must constantly renew its process of expression, so that those not part of the group will remain unable to understand it. The existence of slang dictionaries, of course, cancels the effectiveness of certain words. Numerous slang terms pass into informal mainstream speech, and thence sometimes into mainstream formal speech.
Originally, certain slang was associated with the criminal underworld; it therefore carried very vulgar connotations, and was strictly rejected by speakers of "proper" language. Other groups, especially those on the margins of mainstream society, developed their own slangs.
Examples of Slang
Historical examples of slang are the thieves' cant used by beggars and the underworld generally in previous centuries: a number of cant dictionaries were published, many based on that published by Thomas Harman.
Another famous example, still in use, is Cockney rhyming slang in which, in the simplest case, a given word or phrase is replaced by another word or phrase that rhymes with it. Often the rhyming replacement is abbreviated further, making the expressions even more obscure. A new rhyme may then be introduced for the abbreviation and the process continues. Examples of rhyming slang are apples and pears for stairs and trouble (and strife) for wife. An example of truncation and replacement of rhyming slang is bottle and glass for arse (ass). This was reduced to bottle, for which the new rhyme Aristotle was found; Aristotle was then reduced to Aris for which plaster of Paris became the rhyme. This was then reduced to plaster.
Backwards slang, or Backslang, is a form of slang where words are reversed. English backward slang tends to reverse words letter by letter while French backward slang tends to reverse words by syllables. Verlan is a French slang that uses backward words, similar in its methods to the back slang. Louchebem is French butcher's slang, similar to Pig Latin. Vesre is the Río de la Plata's region version of a backwards language which reverses syllables; it is closely associated with lunfardo.
The usage of slang very often involves the creation of novel meanings for existing words. It is very common for such novel meanings to diverge significantly from the standard meaning. In fact, one common process is for a slang word to take on exactly the opposite meaning of the standard definition. This process has given rise to the positive meaning of the word 'bad' such as in the Michael Jackson song of the same title.
Leet Speak (Leet or "1337") is a language that is popular in online video games.
Nadsat is a form of slang used in the book A Clockwork Orange, which borrows words from Russian and from various types of English slang.
Polari is an interesting example of slang that drew on various sources, including Cockney and Italian. Polari was used in London fish markets and the gay subculture in Britain in the 1950s and 1960s, becoming more widely known from its use by two camp characters, Julian and Sandy, in Round the Horne, a popular radio show.
Source
http://www.aboutlanguageschools.com/language/slang/

- 10 British Slang Expressions You Will Hear When Visiting London
If you?re planning on visiting London in the future, you might just want to familiarise yourself with some British Slang expressions that are very commonly used by the British.They will be very useful particularly if you?re likely to be socialising with...

- 10 Hard To Translate English Words
Inspired by a comment by a Listverse contributor on a recent list dealing with Untranslatable words, I decided to submit my first official Listverse list on words that represent concepts which are hard to translate from English into other languages....

- Cursing And Swearing (slangs)
Q: What's the feminine version of womanizer? A: Maneater is the female equivalent to  male-associated word like womanizer. An irresistible woman who chews and spits out men after using them for some sort of gain -- be it sexual, financial or...

- English Language: Cockney Rhyming Slang
(C) Keith Park I have written quite a few hubs in the past about various aspects of the English language such as Yorkshire dialect, UK slang and UK slang the sequel. A comment on one of these from Hubber Billy decided me on this hub. Cockney rhyming slang...